Highway Distractions – Stay Safe Out There

Distracted driving is not new. As a kid, I remember my mother swerving to the side of the road to warn my brother and me to pipe down, stop arguing/starting/poking one another so she could hear herself think – and drive. We did not have the benefit of technological babysitters back in the dark ages. 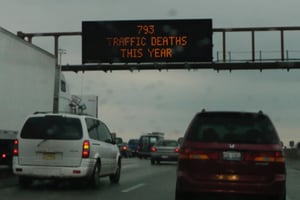 That’s minor compared to the accident statistics – about 17,000 and 140 fatalities since 2012 – attributed to distracted driving. A colleague has taken up the cause after her adult daughter was mowed down in a crosswalk, walking her puppy. She was badly injured but recovered. The puppy is ok! The driver was talking to the passenger and never saw her.

More disturbing is that highway signage reminding drivers to pay attention may actually cause distractions and crashes. StreetsBlogUSA reported in May, 2022 that safety billboards may cause 17,000 crashes per year. The study results are here. 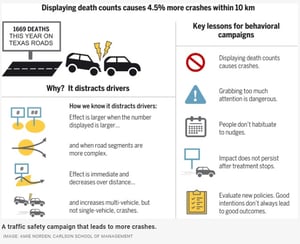 From the article: “We were totally surprised,” said Joshua Madsen, assistant professor at the Carlson School of Management and the co-author of the study. “We thought these signs would make roads safer. I guess we joked around that it would be funny if they didn’t — well, funny in all the wrong ways.”

Madsen says more research is needed to understand the safety impact of other dynamic safety signage — those zippy one-liners DOTs keep churning out might be a good candidate — but warns that, in general, roadside education campaigns should be backed by more evidence.

“Goodness gracious, its 2022; let’s analyze the data,” he said. “Let’s have DOTs actually conduct some validation and say, ‘is this [roadside education campaign] helping, or heaven forbid, is it actually hurting?’… We need to ask ourselves: what is the right mix of messages, the right content for these messages, the right time and way to show them — or maybe even, should we just not be having messages [on roadsides] at all?”

Virginia Department of Transportation study is citing scientific evidence that the messages are memorable and effective. The study involved drivers wearing a helmet that measured blood flow to the prefrontal cortex – an increase in blood flow indicated increased attention. One concern is that clever messages may encourage drivers to capture the moment on a phone. 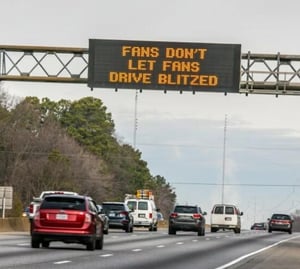 VDOT Chief Deputy Commissioner Rob Cary said, "We would certainly ask people not to photograph (the signs) as they drive down the road.” "[If] you're in the passenger seat, it's fine."

The article also cited that messages might be memorable and change some behavior, but it's unclear what the sign's impacts are on the overall transportation landscape. Virginia saw 105,000 crashes and 847 deaths in 2020, an increase over the prior year. That trend is similar across the country because lower traffic volumes meant higher speeds and more deadly crashes in the pandemic year.

All this begs the question – does the type of display help reduce distractions? For example, are LED signs over the highway shifting attention too long from driving? Would something more subtle convey information quickly and allow the driver to resume full attention to driving?

Many communities, cities and towns have light restrictions – they don’t want to contribute to light pollution with very bright signs. In Boston, for example, several sites sport two types of ePaper signs – from Soofa and GDS. They are front light to be readable at night, but don’t burn brightly like Times Square in New York City or the myriad of intensely bright signage in Las Vegas. 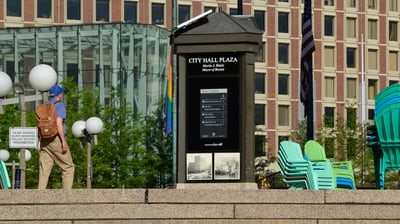 Case in point is the San Diego Rental Car Center. City planners needed to fulfill a commitment to reduce light pollution and add to the aesthetic of the city. They choose the Dazzle camouflage pattern created in The Great War – World War 1. The pattern is visible from the highway, but is not so bright as to create a distraction. The pattern shifts softly and makes a statement – in a whisper!

Drivers have a lot of competition for their attention. Whether it’s messaging about traffic conditions, Amber or Silver alerts, requests for attention or just fun – pile that on to the eating/calling/texting/GPS routing/looking for a rest area/hunger/DJ duties or just telling the kiddos to pipe down – it’s a bad situation.

How do you cope with distractions? Do you rely on lane assist and adaptive braking to help you drive? How about school zones and neighborhoods? Urban areas with busy streets and lots of pedestrians? I have to say, I understand the appeal of ride share!